Edelheim is a role-playing world developed and published by the Parentheses community for the BYOND platform. Released in 2019, it is the twelfth role-playing world. Set in a hard fantasy world on the eponymous continent of Edelheim, the current story arc focuses on the return of the Inferna.

The role-play is currently on hiatus. 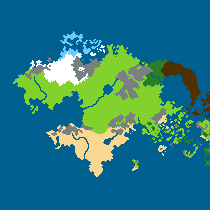 Edelheim is a vast continent divided up by several nations—each with their own laws and cultures.

The northwestern region of Edelheim is comprised of grassy flat lands, icy forests and mountains, and frozen wastelands. It is ruled by the nation of Kyburn.

The southern region of Edelheim is a large, barren desert under the control of the nation of Nyth. Off the coast of Nyth to the southeast is the archipelago of coral islands owned by the Calcean Shoals Federation. Farther southeast is an island oasis controlled by Nyth.

The northeastern region of Edelheim is a swampy, decaying land walled off from the rest of the continent. This area is controlled by the nation of Volactis.

Edelheim is host to a wide variety of races, with the most prolific being humans. The small, wooden imp-like shrubants and strange mechanical beings known as machines can also be found in all corners of the continent.

An abundance of of the short, cruel, and green-skinned goblins still exist in region formerly ruled by Korus—forming tribes and warring amongst themselves. There also exists a subspecies of goblin, known to be hardier and with gray skin—the hobgoblin. The iron-rich Naurodin Mountains house the majority of the dwarfs. The natrix make their homes in both Nyth and the Calcean Shoals Federation; the Nythi natrix and Calcean natrix being bitter rivals.

Several minor races also exist, notably the bog-dwelling frogmen known as the rana, the catfolk of Nyth known as the meioux, and the fox-like people of the Rainy Isle known as the tenko.